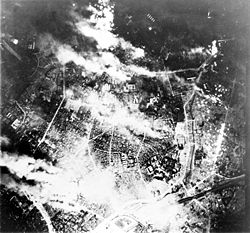 The Bombing of Tokyo (東京大空襲 Tōkyōdaikūshū) often refers to a series of firebombing air raids by the United States Army Air Forces during the Pacific campaigns of World War II. On the night of 9–10 March 1945, Operation Meetinghouse was conducted and is regarded as the single most destructive bombing raid in human history:[1] 16 square miles (41 km2) of central Tokyo was annihilated, over 1 million were made homeless with an estimated 100,000 civilian deaths. The Japanese later called this event Night of the Black Snow.

Kayoko mentioned these in the Performing the Archive workshop