One of the artists Elena told me about during out recent meeting is Tanja Ostojic. She is currently in a show at Pratt called Feminism is Politics which I plan to see later this month.

What is interesting about Tanja’s work – at least based on the descriptions I’ve heard and read about her work is that she has done projects that incorporate many different actions/installations/media/collaborations/layers, etc., and so invites closer inspection on how she is organizing/creating these projects. 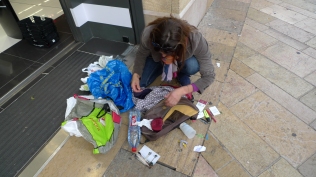 One of these (which will be included in the show at Pratt) is her “Misplaced Women?” project – a workshop and performance series that she has presented in a variety of settings all over the world and which involve the unpacking of one’s personal belongings in a public space – an experience common among refugees. In the Borders Section of her Misplaced Women? site, there is a post by Jasmina Tešanović describing her border-crossing experiences – and is, herself, a nomadic writer and creative activist.

** NOTE TO SELF: Research Tanja’s process of organizing her projects – both getting them out into the world/community and getting the participants to share their experiences..

Some of the earlier work I’ve looked at/researched so far:

“Vacation with Curator” project – a durational performance/experiment intended to create “scandal” and media attention to some degree, while simultaneously exploiting the commonly accepted practice of sleeping with men in order to get ahead in the art world.

Here’s an interview with Tanja in Berlin Art Link on her research on the Roma people and her Eurosceptic views.

Here’s some of her writing on Crossing Borders/Development of Diverse Artistic Strategies.

** NOTE TO SELF: Research Tanja’s process of organizing her projects – both getting them out into the world/community and getting the participants to share their experiences..